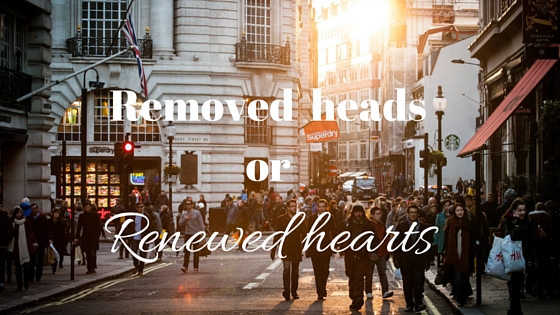 In the incident recorded in John 8:1-11, whereby a woman caught in adultery was brought before Jesus by the Jewish religious leaders, the issue was not about the fact of the sin. Both groups, Jesus and the men, were perfectly in agreement that adultery was wrong. Jesus was not repudiating the ten commandments.

The difference between them was the desired goal. The men were after condemnation. All they wanted was for Jesus to affirm the sentence. Never mind that they were being hypocrites for not bringing her partner along; it always takes two people to commit adultery. They had no love for the woman. They did not desire to see her changed and transformed. All they wanted was her head. Jesus, however, wanted change; He wanted restoration. He had not come to destroy but save. He didn’t want people’s heads; he wanted their hearts renewed. Removed heads means no society; changed hearts means a new society. This was his goal, and it still is today.

In our dealings with others, what do we seek? Do we seek that people suffer for their offences and negative actions? Are we glad when, say, a prostitute is murdered by ritualists, or a corrupt politician dies in a car accident? Do we sense that self-righteous delight that ‘they got what they deserved’?

Or, like Jesus, do we weep over the misery and decay which sin works in people’s lives? Do we seek renewal in people’s lives, helping to bring them closer to the God who loves them and desires to give them new lives. If we belong to Christ or seek to follow Him, this must be our approach towards others, including the ‘sinners’ in our society. For He did not come to save the righteous, but to call the ungodly to repentance.