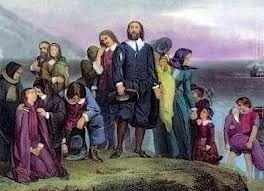 (This is an excerpt from the author’s book, A QUEST FOR GODLINESS: The Puritan Vision of the Christian Life, published by Crossway)

Horse Racing is said to be the sport of kings. The sport of slinging mud has, however, a wider following. Pillorying the Puritans, in particular, has long been a popular pastime both sides of the Atlantic, and most people’s image of Puritanism still has on it much disfiguring dirt that needs to be scraped off.

‘Puritan’ as a name was, in fact, mud from the start. Coined in the early 1560′s, it was always a satirical smear word implying peevishness, censoriousness, conceit, and a measure of hypocrisy, over and above its basic implication of religiously motivated discontent with what was seen as Elizabeth’s Laodicean and compromising Church of England. Later, the word gained the further, political connotation of being against the Stuart monarchy and for some sort of republicanism; its primary reference, however, was still to what was seen as an odd, furious, and ugly form of Protestant religion.

In England, anti-Puritan feeling was let loose at the time of the Restoration and has flowed freely ever since. In North America it built up slowly after the days of Jonathan Edwards to reach its zenith a hundred years ago in post-Puritan New England. For the past half-century, however, scholars have been meticulously wiping away the mud, and as Michelangelo’s frescoes in the Sistine Chapel. Have unfamiliar colours today now that restorers have removed the dark varnish, so the conventional image of the Puritans has been radically revamped, at least for those in the know. (Knowledge, alas, travels slowly in some quarters.) Taught by Perry Miller, William Haller, Marshall Knappen, Percy Scholes, Edmund Morgan, and a host of more recent researchers, informed folk now acknowledge that the typical Puritans were not wild men, fierce and freaky, religious fanatics and social extremists, but sober, conscientious, and cultured citizens: persons of principle, devoted, determined, and disciplined, excelling in the domestic virtues, and with no obvious shortcomings save a tendency to run to works when saying anything important, whether to God or to man. At last the record has been put straight.

But even so, the suggestion that we ‘need’ the Puritans – we late twentieth-century Westerners, with all our sophistication and mastery of technique in both secular and sacred fields – may prompt some lifting of eyebrows. The belief that the Puritans, even if they were in fact responsible citizens, were comic and pathetic in equal degree, being na ve and superstitious, primitive and gullible, superserious, overscrupulous, majoring in minors, and unable or unwilling to relax, dies hard. What could these zealots give us that we need, it is asked.

The answer, in one word, is maturity. Maturity is a compound of wisdom, goodwill, resilience, and creativity. The Puritans exemplified maturity; we don’t. We are spiritual dwarfs. A much-traveled leader, a native American (be it said), has declared that he fins North American Protestantism, man-centered, manipulative, success-oriented, self-indulgent and sentimental, as it blatantly is, to be 3,000 miles wide and half an inch deep. The Puritans, by contrast, as a body were giants. They were great souls serving a great God. In them clear-headed passion and warm-hearted compassion combined. Visionary and practical, idealistic and realistic too, goal-oriented and methodical, they were great believers, great hopers, great doers, and great sufferers. But their sufferings, both sides of the ocean (in old England from the authorities and in New England from the elements), seasoned and ripened them till they gained a stature that was nothing short of heroic. Ease and luxury, such as our affluence brings us today, do not make for maturity; hardship and struggle however do, and the Puritans’ battles against the spiritual and climatic wildernesses in which God set them produced a virility of character, undaunted and unsinkable, rising above discouragement and fears, for which the true precedents and models are men like Moses, and Nehemiah, and Peter after Pentecost, and the apostle Paul.

Spiritual warfare made the Puritans what they were. They accepted conflict as their calling, seeing themselves as their Lord’s soldier-pilgrims, just as in Bunyan’s allegory, and not expecting to be able to advance a single step without opposition of one sort or another. Wrote John Geree, in his tract ‘The Character of an Old English Puritane or Noncomformist (1646)’: ‘His whole life he accounted a warfare, wherein Christ was his captain, his arms, praiers and tears. The Crosse his Banner and his word [motto] Vincit qui patitur [he who suffers conquers].’

The Puritans lost, more or less, every public battle that they fought. Those who stayed in England did not change the Church of England as they hoped to do, nor did they revive more than a minority of its adherents, and eventually they were driven out of Anglicanism by calculated pressure on their consciences. Those who crossed the Atlantic failed to establish new Jerusalem in New England; for the first fifty years their little colonies barely survived. They hung on by the skin of their teeth. But the moral and spiritual victories that the Puritans won by keeping sweet, peaceful, patient, obedient, and hopeful under sustained and seemingly intolerable pressures and frustrations give them a place of high honor in the believers’ hall of fame, where Hebrews 11 is the first gallery. It was out of this constant furnace-experience that their maturity was wrought and their wisdom concerning discipleship was refined. George Whitefield, the evangelist, wrote of them as follows:

“Ministers never write or preach so well as when under the cross; the Spirit of Christ and of glory then rests upon them. It was this, no doubt, that made the Puritans… such burning lights and shining lights. When cast out by the black Bartholomew-act [the 1662 Act of Uniformity] and driven from their respective charges to preach in barns and fields, in the highways and hedges, they in an especial manner wrote and preached as men having authority. Though dead, by their writings they yet speak; a peculiar unction attends them to this very hour….”

Those words come from a preface to a reprint of Bunyan’s works that appeared in 1767; but the unction continues, the authority is still felt, and the mature wisdom still remains breathtaking, as all modern Puritan-readers soon discover for themselves. Through the legacy of this literature the Puritans can help us today towards the maturity that they knew, and that we need.